This week’s #WCW is Joanna James, film director, producer, and founder of MAPP. As a leader for women in the entertainment industry, Joanna is known as a creative entrepreneur for her development of the MAPP Impact Campaign, which is an initiative empowering women to lead through Mentorship, Advocacy, Pandemic relief, and the Power of women (MAPP). She is also the founder and CEO of Zoel Productions, a production company based out of New York and made her Directorial debut for the film A Fine Line, a documentary that sparked national conversations regarding gender bias in restaurant culture and the food system.

Since launching MAPP, Joanna has generated tremendous impact honoring women and people of color through recognition and opportunities with media and food & beverage titans. Using her platform she highlights women of all backgrounds in the hospitality industry, lobbying for better safety nets for working women such as paid family leave, and has even initiated a mentorship program for rising stars in the food and beverage world.

We’re honored to nominate Joanna as our #WCW this week! Give her a or comment below to show your support. 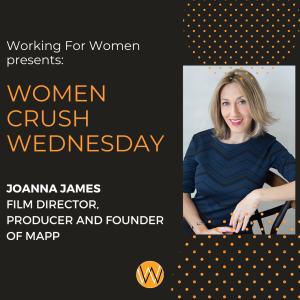 Do you know a woman who is crushing it helping underserved women in their communities?