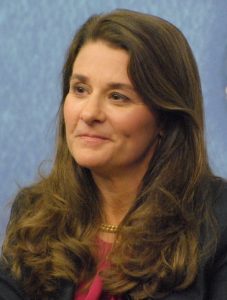 “I want to see more women in the position to make decisions, control resources, and shape policies and perspectives,” says Gates. “I believe that women’s potential is worth investing in—and the people and organizations working to improve women’s lives are, too.”

This new commitment takes advantage of what Gates calls a “window of opportunity,” and what we at Working for Women call a “moment of change”…where the time is NOW for this kind of investment in women. Thanks in part to Gates, the conversation just got louder, and we must raise the volume of our voices and actions to turn momentum into transformation.

Gates and her husband Bill, through their Bill and Melinda Gates Foundation, have long been focusing on women’s empowerment. They’re guided by a belief that when women and girls are empowered to live to their full potential and act as agents of change in their communities, it creates a ripple effect where everyone benefits.

That’s a broad idea, and they break it down by defining it in terms of two elements of ongoing change:

Expanding choice: When a woman or girl’s choices expand, she has more freedom over big life decisions such as when and whom to marry, whether to have children and how many, where she’ll live, her friends and network, and her livelihood.

Strengthening voice: When a woman or girl grows her voice, she’s able to be heard in discussions and decisions, and thus have more control over, her life and future in both public and private settings.

These happen when power and its imbalances are shifted from “power over” to “power to” (one’s ability to make decisions and act on them), “power within” (one’s sense of self-esteem, dignity, and self-worth), and “power with” (one’s strength gained from solidarity and collective support).

That last one – power with, through solidarity and collective support – resonates deeply with us at W4W, because our specific empowerment mission to help women achieve economic independence is driven by the idea that we can do more together than on our own.

We’re already seeing the impacts of using “power with” to take a win-win-win approach: we partner with nonprofits that reach underserved women; our business members contribute to these partners financially and through staff volunteer engagement. The result? Our nonprofits gain resources and grow their impact, while businesses show that they’re good corporate citizens. In her pledge announcement, Melinda Gates mentioned how both grand gestures and daily acts of courage combine to make change happen. That’s what Working for Women is all about. Let’s connect…together, we can move that needle toward gender equality and economic independence for all women.