The Future of Work for Women

The Institute for Women’s Policy Research (IWPR) recently produced a report that gives us pause while offering important takeaways for women in the workforce. Titled Women, Automation, and the Future of Work, the report is the first comprehensive gender analysis of the potential impact of technological change on employment for women and men in the U.S. with an emphasis on women.

According to IWPR, any conversation around technological change and work must, by necessity, include gender. Why? Because women often hold jobs —cashiers, secretaries, bookkeepers etc.  – that are at the greatest risk of automation in the not-so-distant future.

How will the paradigmatic shift affect the quality and quantity of jobs in the future? By searching for answers to those questions, the report’s aim is to mitigate the potential impact of technological change through such initiatives as gender-inclusive policies. At a basic level, the report adds fuel to the proverbial fire at Working for Women and our mission of supporting women in the workforce.

Women make up less than half (47%) of the workforce but represent 58% of people   at the highest risk of losing their jobs to technology. The jobs that are most likely to be impacted by technological change represent vital pathways to the middle-class (secretaries, accountants, for example), essential to upward movement and economic sustainability.

To be sure, women are also overrepresented in “safe” jobs like child care, education and home health care that are least likely to be affected by technology. But these are also the lower paying jobs with the least access to benefits.

Here’s the good news: women are more likely than men to work with computers and digital media. The not-so-good news: women are still highly underrepresented in the highest-paid tech jobs. To make matters worse, the study found that race and gender play a big role. Take Hispanic women. Considering their share of the workforce, women of Hispanic origin are 76% less likely to work in one of the three largest tech occupations—Computer Scientists and Systems Analysts, Software Developers, and Computer Support Specialists.\ 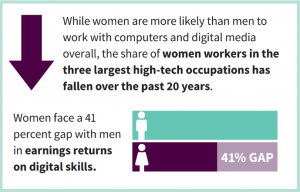 On the positive side, ever-increasing opportunities in the gig economy allow women to fully engage in areas where they are typically underrepresented, such as ridesharing and entrepreneurship. But inequitable pay and an easy target for discrimination and online harassment shape the gig landscape too.

The report proposes a number of policy and program interventions to counter some of the risks associated with the technological shift:

The report offers much food for thought and demonstrates that it is possible to build a future of work that reduces inequalities, improves economic security, and ensures that women and communities of color reap the many benefits of technological change. With the inevitable shift in our workforce, our hope is that these learnings encourage important steps forward in support of the many underserved women in our communities. The time to act is now.

Join to support the future of work for women